I found it. I found the first picture I took with my first camera. I was looking for it to accompany and earlier blog post whose wanderings of thought included memory. In the weeks since then, memory and photography have been much on my mind. My dear friend and mentor, Blaine Pennington shared a link to an article by Polly Gaillard about photographs and memories (and, no, I do not mean the Jim Croce record, though it is a huge part of the soundtrack of my youth and still excellent). It seems considering memory is pretty inherently linked to image making.

She talks about being asked for images she made of subjects who recently died. I’ve had that very great honor, too. It is one of the great beauties of being a photographer who makes images of people, to be able to give people talismans of their loved ones, to build and share that container for memory.

Citing Sally Mann’s take on photography roles in memory, she quotes from Mann’s book, Hold Still: ““Photography would seem to preserve our past and make it invulnerable to the distortions of repeated memorial superimpositions, but I think that is a fallacy: photographs supplant and corrupt the past, all the while creating their own memories.”  Discussing her late father, Mann continues: “I’ve lost any clear idea of what my father really looked like, how he moved, sounded; the him-ness of him.  I only have this (photograph).  It isn’t death that stole my father from me; it’s the photograph.

Neither Gaillard nor I share that experience/opinion. While I do believe that a photograph catalyzes only pieces of memory, that a collection of photos is a tight edit of a life and that it, therefore, contains its own biases, I do not think it robs us of memory. My experience is that it extends our memories, it catalyzes memories we might otherwise have lost.

Without the photos of my childhood, I would have fewer memories as vivid and fully realized that I do. They make for a bias in memory, but so does what I have forgotten and remembered on my own. And, there are those gone from my life of whom I do not have any pictures. More and more, I have just the feel of them, just the feelings I hold for them. I have their basic shape and palette, but the details of the faces are fading, and maybe I have them entirely wrong, now. Who knows? Is one way or another better or more true? I don’t think so. But, I do know that I derive joy and pleasure from my trove of images. And, I love the questions they raise, the possibilities as well as the definition. Reflections, stories, questions… I can’t resist. 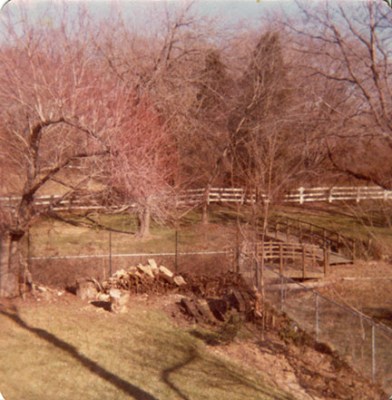 This unimportant old thing, this dingy shot from a plastic camera made by an 8 year old, shot from the back porch on the blah Christmas day she finally got her first camera: is it true? Is the memory it sealed in my mind valid? I think so. I’d have a basic idea of what the back yard of the house I grew up in looked like, with the wood pile in the back corner under the maple tree, by the tremendous American Elm stump. But, would I recall the fence extension that my dad had to rig up, when our big black lab, Max (the best dog ever), figured out he could walk up that convenient stacked wood staircase and just pop over the chain link? Would even reflecting on the space in which I grew up make me think of my dog? And, how much we all loved him? That his dog house was in this same back yard, and I used to go hide int here with him on really bad days? I can’t say that it would. It’s important to me.

Yeah, I’m a sentimental fool. But, I guess a lot of us photographers are. Thank goodness so many of you are, too.What do you think? Photography: memory maker or breaker, or something more subtle?

OK, now I need to go put on some Jim Croce.